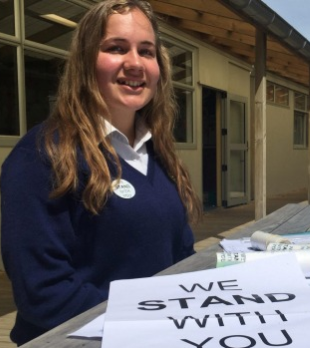 A year 10 student was so concerned Muslim students might feel vulnerable after the Paris attacks she started a campaign of solidarity.

Wellington East Girls' College student Ivana Emer, 15, was inspired to change her topic for a social studies assignment to looking at how Muslims were treated after terrorist attacks. After reading articles about the effects of the attacks on Muslims, Ivana made posters with the words "We Stand With You" and pinned them up around the school. She encouraged students to send her pictures of themselves with the posters, and received about 25 photos with 50 students in them. Read the article at stuff.co.nz.